For a short time in early 2007, I was kind of a "big deal" in the blogging world. My former "Harmacy" blog on the now-defunct Yahoo! 360 was voted Canadian Blog Of The Year. So I did what suddenly-famous people have done since time immemorial --I merchandised. There were T-shirts, hats, bags, even mouse pads (sadly, however, I was unable to find real mice willing to be branded with my designs).

Amazingly, some people even bought things.

Well, all that hard work, and continued total apathy of mine since then has finally paid off. I just returned home to discover my royalty check from the manufacturer in my mailbox. 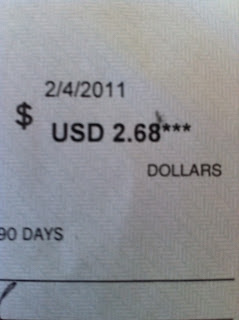 Who's your Sugar Daddy now?
Posted by Harmaceutical at 4:00 PM 6 comments: 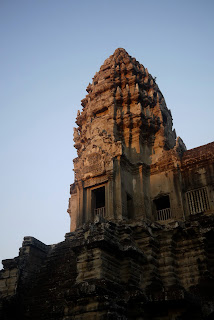 I am back. Returned from my most excellent trip in Cambodia, and the Angkor Wat environs. Is 3 days too short a time to fall in love? Not when the object of my heart is this beautiful country, which deserves to be in so much better shape then it is now. Beautiful people, beautiful culture, beautiful land. 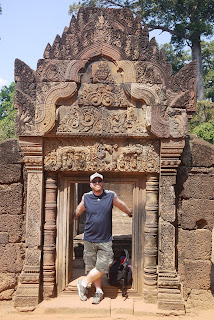 My love can be attested by the fact that I took over 550 photos while I was there, almost all of them of the temples and structures of Angkor Wat its surroundings. Feel free to peruse some of them on my Flickr page.


I won't hold it against you if you decide to just skim them.
Posted by Harmaceutical at 8:00 PM No comments:

I was getting some passport photos from an instant-photo booth in the train station. I need them for my entry visa to Cambodia, which is where I'm flying to this weekend.

The machine helpfully had an "English" option on the touch screen.

Not so encouraging was this message: 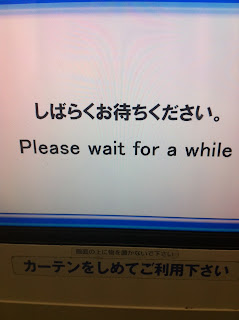 At least the makers of the machine can't be accused of trying to over-sell their product. 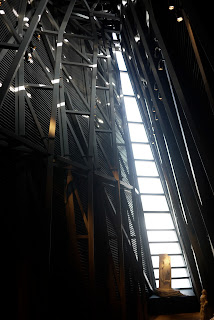 While home for Christmas, my father and I visited the newish Canadian War Museum.

It was very well-done, and a fitting tribute to the men and women who shaped Canada's history, and gave their times and lives for a cause they believe in.

My father showed his Veteran's Card when we entered. We received not only free admission to the museum, but free parking, and vouchers for lunch at the cafeteria. It was a small gesture, but it still touched me to know that my father's career of service was appreciated. Because he really is my hero, and I'm very proud of everything he has accomplished.

The photo is of Regeneration Hall, which was designed by the architect to be a physical representation of hope for future generations. The window itself frames the Peace Tower of Canada's Parliament buildings. It was somber, but somehow very soothing being in there.
Posted by Harmaceutical at 8:52 AM 1 comment: 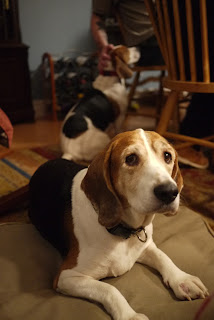 He is, obviously, a Beagle.

My sister's beagle, to be exact. He's old, but we'll call him distinguished instead.

Behind him is Dillinger. Dillinger is also a Beagle. More than that, he is a Rescue Beagle. Some idiots thought he would enjoy being the subject of testing.

Now he has a wonderful home and freedom.

This picture makes me happy.
Posted by Harmaceutical at 10:23 AM 2 comments: 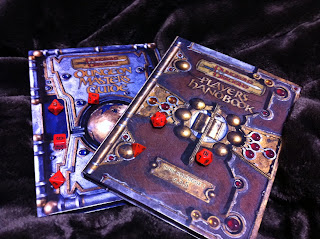 Yes, those are in fact Dungeons & Dragons manuals and dice.

Yes, I am indeed starting a Dungeons & Dragons campaign with a few friends this weekend.

Yes, I am the biggest geek in the entire world.


Still find me sexy?
Posted by Harmaceutical at 3:01 PM 2 comments:

I'm in a musical mood this week. No, I'm not suddenly bursting into elaborate song-and-dance numbers. Although, that could be arranged for a fee. Rather, the purchase of my new sound system has meant that I've been listening to even more music than I usually do. "Usually" being a word that could be replaced by "pretty much all the time."

Last night, I was enjoying a quiet evening in. The lights were down low. I was relaxing on my heated carpet with a half-bottle of superb Italian Chianti, and I was listening to the tunes washing over me. Now, I would never be one to condone drinking alone. But, if you were so inclined, these are 5 album choices that you could do worse with than to use as your musical accompaniment:

"Fox Confessor Brings the Flood" by Neko Case. Subdued, slow-tempo torch songs by Ms. Case. Just hearing her voice sets me to a slow burn that practically mulls wine by itself, countered only by the goosebumps that run up my spine when she hits the bridge of each song.

"Time Out" by the Dave Brubeck Quartet. One of my personal favorite jazz albums ever. Recorded in 1959, it's Mr. Brubeck early in his career, but "Take Five" is my all-time favorite jazz tracks, and the version on here is absolutely smoking. In fact, I could listen to nothing but that track on repeat and polish off a crate of wine, no worries. It doesn't hurt that the rest of the album is equally as awesome.

"Blue" by Joni Mitchell. Let's face it, there's a fair chance you'd be drinking red wine alone on a Wednesday evening because of relationship problems. Or, worse still, a breakup. In that case, you might as well be wallowing in self-pity, sadness, and loss with the ultimate break-up album. I guarantee that, given enough wine, you'll find ways to apply each individual lyric to your own situation. And yet, there's still an air of hope and optimism throughout the album that makes you feel better for having heard it.

"Floodland" by Sisters of Mercy. Sometimes, in the dark of the evening, in the solitude of your own home, in the grips of a nice bottle of wine, all you really want to do is dress up in black, light some candles, and listen to Goth music. And that's fine. Just make sure it's this album, if you want it to be done right.

"Discreet Music" by Brian Eno. Other times, you just want to have something in the background, so you can focus solely on the enjoyment of the wine, and get lost within your own thoughts. This early ambient album of Eno's is just the thing. Simple and soothing, it's best played low and allowed to wash through the room and over you. Don't listen for meaning it, just enjoy the ride.

Of course, if I were entertaining others, it would be a completely different list. But that, as they say, is a question for another day.
Posted by Harmaceutical at 3:49 PM No comments: